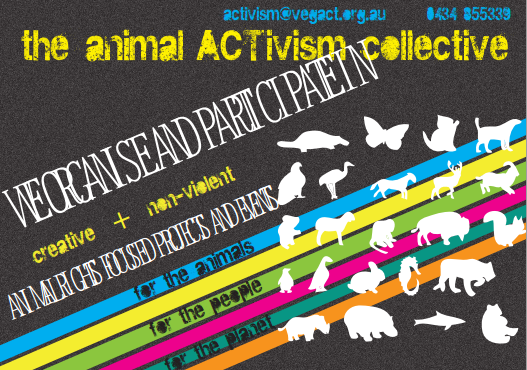 About
The Animal ACTivism Collective provides a forum for people in the ACT to network, collaborate and advocate for animal rights. We foster open, honest discussion, debate and community movement on the ethical, health and environmental issues associated with the oppression of animals.
We function as a voluntary, egalitarian, non-hierarchical collective.
We initiate, organise and participate in animal rights-focused activism using non-violent action to generate and engage in creative education, projects and events.
We seek to network with and support the activism of formally constituted animal rights organisations that also oppose the exploitation of non-humans.

Background
The Animal ACTivism Collective was founded in November 2011 by a small group of people who wanted to do animal activism in new ways, with an emphasis on these being creative and of a non-violent nature.
The collective works without a formal committee and adopts a loose, network style of doing actions where any individual can initiate an idea and then put that out to others, inviting people to join in if they wish.
A number of positive actions have occurred since AnimalACTivism Collective came into being including; providing vegan free food twice at the annual Anzac Peace Vigil, providing free vegan food for events at the Aboriginal Tent Embassy and participating in a working bee there, Screenings of Peaceable Kingdom and Tegan the Vegan followed by discussion and food, having stalls and creating street art at the Art Not Apart Festival, creation of Street Art around Canberra, creation of ‘Why No Cow’s Milk’ educational cards, promotion of Melanie Joy Talk, promotion and provision of vegan food at author Will Tuttle vegan talk, involvement providing food at varying Food Co-op events, providing free vegan food at the Canberra Peace Convergence at the Tent Embassy, creation of banners and placards,  Vegan presence at a number of refugee and environmental rallies, stalls at community events, providing vegan food for Music for Maules fundraiser.
One strategy the Collective adopts is to work alongside other groups and individuals who are engaged in a variety of animal and social justice issues, and to engage in a friendly, cooperative way.  Provision of vegan food is often part of our actions, along with providing educational information.

Here are the cows business cards we distribute: 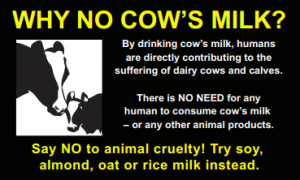 What happens to the calf?
In order to produce milk, dairy cows are kept almost continually pregnant. Calves are separated from their grieving mothers soon after birth, and routinely killed as ‘waste products’ of the dairy industry. Each year, this is the fate of around 700,000 bobby calves in Australia, just so we can drink the milk nature intended for the calf.  Are you OK with this?  If not, boycott cruelty – go vegan.